I'm keeping this blog "light." To read my serious take on events in Iraq, Afghanistan, US politics or issues like Depleted Uranium I have another blog because these are
Complex Topics.

My newest blog is devoted to Anthropogenic Global Warming because
I'm a Skeptic.

At Mucross House in Killarney, Ireland

My Day Started With a BANG!

I shuffled to the bathroom at the crack of dawn. I'm still recovering from broken ribs that I collected last week and I'm still not moving briskly. I have to go outside and down a little walkway about twenty feet in our compound to get to the bathroom. The bathroom is in the same building, mind you, it's just not connected to the rooms via an interior access.

I assumed the seat and BANG! An SVBIED (Suicide Vehicle Borne IED) exploded a few blocks away rattling the windows...then the gunfire. And I'm sitting there thinking, man is this bad timing!

As the shooting didn't sound too close I stayed where I was. Completing my mission, I went outside and stood in the rain for a bit and listened to the pitter patter of AK fire. Someone was having a bad morning. I went out to the street and asked our Afghan guards if they knew what got hit. They told me it was near the Safi Landmark Hotel, which is a four-star hotel that opened up in 2006 at the edge of the diplomatic quarter in town. OK, far enough away not to get excited.

It turns out the attack was done by five bad guys this time. The first one blew himself up in the SVBIED. The second one was shot and killed before he could detonate and the other three holed up in a guest house nearby until the police went in and killed them. Luckily it was a Friday and The Prophet's birthday (PBUH). The attack occured before folks really got moving around and the normally busy shops in the area weren't open yet. 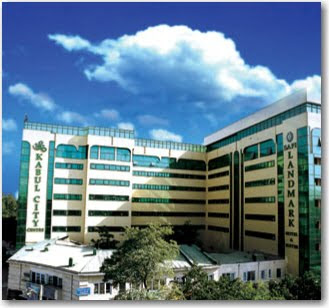 The Safi Landmark Hotel
Apparently most of the windows in the front were shattered by the blast.

By noon it was all quiet and things were starting to return to normal with cleanup crews and the fire department hard at work. Looks like about nine civilians (mostly Indians) and three police officers were killed and about thirty-two people wounded. Timing is everything. It could have been much worse just two hours later.

The pictures below are of the scene afterwards by Reuters photographer Ahmad Masood. 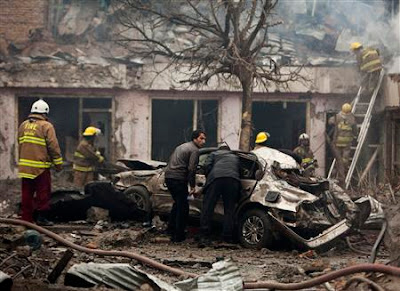 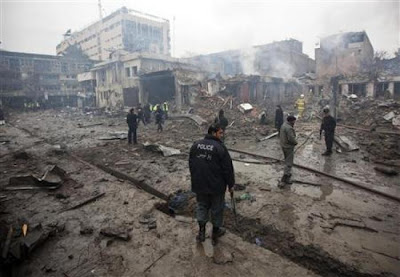 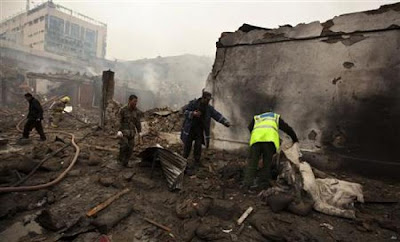 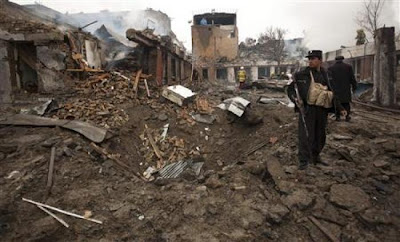 Wow thats still quite a mess. Its a crazy world when something like that is still not so startling that you have to disturb your toilet time for it. I'm consoling myself that in South Africa, while still crime-ridden, we're not at the stage of bomb blasts being part of our daily routine yet. :) Hope your ribs are feeling better soon.

Eek. That would scare the crap out of me. I'm glad nothing came your way. Sorry to hear about the ribs though. Hope they heal soon.

Wow, where did you gather broken ribs from?! You can't even hold them in a cast, can you? Get well soon.

Good to hear from you again. I hope I'll be "getting around more" again. Luckily I'm a fast healer even at my age. I'm not ready for a boxing match or anything like that, but I'm definitely getting around better.

Hopefully you never get to the suicide bomber phase. I keep hearing how things are getting worse in South Africa. That's a real shame.

Thanks for the rib wishes. Doing better.

Sadly, noting "glorious." I slipped coming out of the shower of all the mundane dumb things.

Nope, they discovered that with ribs, constraining them brought on pneumonia. So, you just take muscle relaxers to calm the spasms and gut it out. Coughing requires bracing the ribs with a pillow.

I've progressed now that I can cough and sneeze without bracing, but it still hurts some.

Not doing any boxing or other contact sports for a while.

Thanks for the good wishes.

Reminds me so much of an accient uncle's story. He claimed he was in the bathroom/outhouse/lavatory at the time of the Halifax explosion ( due to go overseas.)
Always claimed the thing that bothered him the most is that he couldn't remember if he wiped himself or not.

Striking photos. Glad you're OK, except for the ribs.

I'm always last to know, but I'm glad you're back in the saddle, or at least you were for a couple of seconds there. To think, I get bothered when the doorbell or phone rings!

I'm very sorry for the loss of life and the damage. I'm glad it wasn't later and worse, as you said. Take care of those cracked ribs. See, here's when those old-style girdles make sense! Plus, they make your seat-facing parts shapely and fabulous!

I'd never understand why kill each other.

Glad you're still around. I haven't been blogging recently and have been thinking about you. Hope you'll feel better soon.

Hey John, how are you? Are you home yet? You haven't posted in awhile and was worried. Have been thinking of you and wishing you well.

Hello there! Been a LONG time since you posted. Praying you're safe and in one piece--did those ribs fuse together yet?